What makes a mobile web app? Is it just a web app that you open on your phone, or is it something different altogether? I ask this question because I’ve noticed an interesting trend: Some software vendors are now offering “mobile apps” which are little more than re-sized web apps. What do I mean? Take a look at the image below: 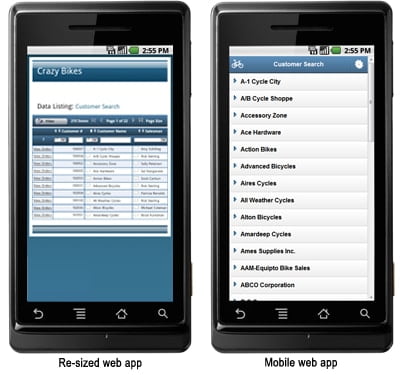 A common mistake when building mobile web apps is assuming that the mobile app should mirror the desktop app in data quantity and layout. When you build a mobile app, two things must happen: First, you must only include data that is absolutely necessary. Second, you must reorganize the way the application displays data to account for the touch interface and small display. Here’s a great example for you.  These links lead to the same app, but one is formatted for a PC and the other one is formatted for a smartphone.  Notice the differences between the two layouts.

Generally speaking, web apps use a lot of images. There are background images, icons, pictures, and more. But, when designing a mobile web app, keep the images to a minimum. Why? Here are a few reasons:

Flash (and some javascript)

I’ll end with the most obvious design mistake. In case you’ve missed Apple’s well publicized feud with Adobe, Flash does not work on iPhones or iPads. Also, while Flash works on most Android smartphones, it certainly doesn’t work well. All that to say…avoid Flash. Also, while javascript works across all platforms, there are some aspects of javascript (like dropdowns) that don’t work very well on smartphones. My advice on javascript: You can use it, but make sure it’s well tested before rolling out any apps.

Designing web apps for use on mobile devices is far more involved than changing the application dimensions. If you want to create useable mobile web apps, certain web design elements should be avoided at all costs. To summarize both blog posts, those elements are: