Built for the IBM System/38 (the IBMi predecessor), the mrc-Query Series was originally designed to help end users create business applications without programming. However, it developed a following with developers and programmers as it automated much of the tedious syntax work they faced on a daily basis.

From that point forward, mrc focused their software development on two underlying principles: Create software that both improves developer productivity and puts development capabilities in the hands of end users. Following those guidelines, mrc released two subsequent software products in the following years:

mrc attributes their success over the past 30 years to constant evolution. "Our software is always evolving, always adapting to changes," says Tyler Wassell, mrc Software Development Manager. "We constantly enhance m-Power with the latest features, so it never becomes outdated."

mrc's unique, "version-less" approach to software development is the driving force behind this evolution. Rather than releasing software versions, mrc constantly enhances their software, averaging over 1 major enhancement per month. In this way, mrc's software has evolved with the changing tech trends through the years. 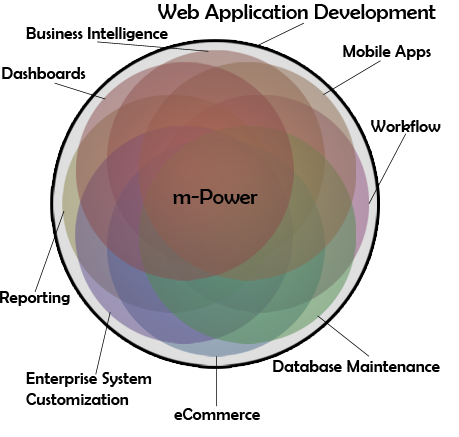 "I'm always amazed at the different ways our customers use m-Power," says Wassell. "Some use it for reporting, others use it to enhance their ERP systems, and others still use it to solve multiple problems across their business. Very few customers buy m-Power for the exact same purpose…which really illustrates m-Power's flexibility."