Boone County's IT department licensed the m-Power Development Platform to address a reporting need, but quickly realized it could help in many areas. They've since used m-Power to address many development needs and give their existing COBOL programmers the ability to create web applications.

Delivered a development project that would normally require 1,000 hours, in just 300 hours

"After going through the RFP process it was clear that m-Power’s ability to exist outside of the iSeries environment, access data across many platforms, provide rapid WYSIWYG development, and function in an all-web based environment just blew the competition away."

Who is Boone County?

Boone County’s IT department needed to complement their character-based, green-screen reporting method with a web reporting solution. Enhancing their reporting was a top priority for a couple of reasons: First, their users were asking for better reporting. Secondly, web reports provide numerous advantages over green screen reports:

Boone County’s biggest challenge in moving to web reporting: Their development staff consisted of 5 COBOL programmers and 1 web developer. Since bringing in new developers wasn’t an option, they needed a reporting tool that would let their current developers build web reports quickly.

Before beginning their search, they first mapped out a few requirements:

"It really saves a lot time. We would never have been able to create this ePollbook application without m-Power."

Boone County went through a complete RFP process in their search for the right reporting option. They examined many products, but found that most were very limited. However, one tool really stuck out to Aron Gish, Boone County’s Director of IT. That tool was m-Power, a web application development platform created by mrc. What Gish found interesting about m-Power wasn’t the fact that it met all of their reporting requirements, which it did. It was the fact that m-Power was more than a report writer. It could handle projects besides reporting, and Gish knew just the problem it could solve: The ePollbook project.

On the IT department’s project list was an ePollbook application, which was to be used for the current year’s upcoming election. An ePollbook is used in place of paper-based pollbooks and lets voting officials review and/or process voter information electronically during an election. It simplifies the voter check-in process and eliminates long wait times. Pollworkers don’t need to search through a printed binder to register a voter in a polling location. With an ePollbook, they can scan the voter’s drivers license, and register each voter electronically.

Building an ePollbook application for the upcoming election was a high priority, but presented a bit of a problem. "We weren’t really sure how we were going to build it," said Gish. But, when he found m-Power, he realized that they could use it for multiple projects. Specifically, Boone County could use m-Power in these ways:

But most importantly, m-Power fit all of their requirements. According to James Barnes, Boone County’s web developer, “After going through the RFP process it was clear that m-Power’s ability to exist outside of the iSeries environment, access data across many platforms, provide rapid WYSIWYG development, and function in an all-web based environment just blew the competition away.”

Boone County purchased m-Power and managed to create the ePollbook application in time for the election. As a result, the voting process was much smoother, and they didn’t have to rely on physical voter registration books. Considering the fact that there are thousands of voters for each polling location and there are 147 polling locations, they can avoid a lot of printing.

They also built all of the reporting applications they needed, as well as a few other web applications. Most importantly, m-Power helped them in a few distinct ways:

They accomplished their goals using their current staff and skills

They were able to build all the applications they needed without bringing in new staff or learning new skills. Their COBOL programmers can now develop basic web apps without learning new programming languages skills. Additionally, their end users can now do their own ad-hoc reporting.

They solved many problems with one tool

What began as a search for a reporting tool ended with multiple problems solved. They now can quickly produce all the reports they need, and their end users can do their own ad-hoc reporting , which frees up the IT staff for other tasks. Additionally, besides the ePollbook project, they’ve also built a number of other web apps with m-Power.

They saved a lot of time 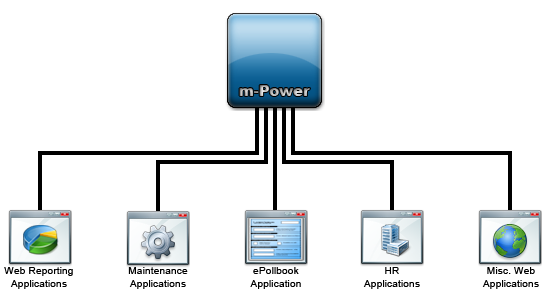 Going forward, Boone County is taking full advantage of m-Power’s flexibility. Although they completed the ePollbook application, and have already created many reports, they’re using m-Power for a number of additional projects. For example, they’ve built simple web applications for maintaining their current databases. They’ve also built an HR application that lets people apply for jobs online. But, the most important part of all: They’re building all of these applications using their current skills and staff.

To learn more about Boone County, you can visit their Web site at: http://www.showmeboone.com/