Software-as-a-Service (SaaS) company, ComPair Data, relied on outside developers for application development. As a result, development projects were expensive and time-consuming--often requiring weeks to develop an application. Read this case study to learn how they used m-Power to bring development in-house and shorten their development process from weeks to hours.

Another aspect of m-Power is the speed at which we can produce most of the applications. If the data is in the proper format in our tables--and it generally is--then all we need to do is pick tables and choose columns through m-Power's menu driven interface. Now, we can actually build applications in hours instead of weeks. 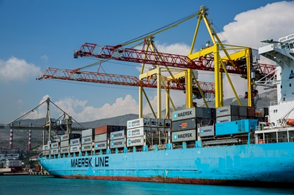 The international shipping industry accounts for 90% of world trade. Without it, the import and export of goods necessary to sustain the global economy would be impossible.

For those involved in international shipping, data plays a pivotal role in day-to-day decision-making. From cargo planning to route selection, it directly impacts their efficiency and profits.

Who do these shipping companies rely on for this critical information? ComPair Data.

ComPair hosts their data on dedicated cloud servers, and licenses access to their customers. Their business revolves around turning logistics data into meaningful management information, and delivering it to their clients in the form of web applications.

It would often take weeks to develop new applications.

The problem: They relied on outside developers for application development. As a result, creating new web applications was both expensive and time-consuming. "It would often take weeks to develop new applications," said Hayes Howard, ComPair Data's Founder and CEO. "It was a process of making sure the developers understood what we needed and where the data was in the database. Then they would have to set up the SQL procedures, create the applications, do their testing, and everything else."

This process wasted money, and required a significant time investment from ComPair. Their development process hinged on effective communication with the developers. Miscommunication resulted in applications that didn't meet ComPair's requirements--creating development delays.

Their reliance on outside developers not only hamstrung new development, it hurt customer service. When customers requested changes to a completed application, ComPair went back to the developers. This caused two problems: First, it hindered ComPair's ability to meet their customer's needs. Second, it made their customers wait for the information they needed.

In the business of data delivery, Howard realized they needed a change. They needed a faster and easier application development and maintenance approach.

After doing their research and testing different solutions, ComPair Data found the answer. They chose m-Power, the web application development platform created by mrc. "I wanted a BI tool that we could use in-house to build applications much more quickly for our users," said Howard. "After looking at different products, we decided on m-Power."

Beyond the breadth of applications they created, m-Power helps them in a few important ways:

Free from relying on expensive developers, ComPair now handles most development in house. As Howard explains, m-Power reduces their development costs. "With m-Power, application development is much cheaper because we're now able to do most of it ourselves," he says.

Now, we can actually build applications in hours instead of weeks.

Developing most applications with m-Power only requires a few hours—a far cry from the weeks it required in the past. In the time formerly spent communicating requirements and changes to outside developers, ComPair can now build most applications themselves. "Another aspect of m-Power is the speed at which we can produce most of the applications," says Howard. "If the data is in the proper format in our tables--and it generally is--then all we need to do is pick tables and choose columns through m-Power's menu driven interface. Now, we can actually build applications in hours instead of weeks."

Howard believes that customer satisfaction is the true measure of success. By that measurement--he says--m-Power has succeeded. Their customers love the information they receive, and the speed at which they can alter applications. "The only way to gauge success is if you're successful at making your customer happy--with the data and the way it's presented and how quickly we respond to questions they have," says Howard. "From that standpoint, I'd say that m-Power's been very successful."

Despite their success, Howard feels like they haven't tapped m-Power's full potential yet. "There are certain things in m-Power that I would like to do more of," he says. "But, I haven't gotten far enough into everything m-Power can do with those applications, especially on the dashboards."

Going forward, the future looks bright for ComPair Data. They now have a process in place that saves time and money while delivering results that delight their customers. For Howard, that's the most important metric.

To learn more about ComPair Data, you can visit their Web site at: http://www.bluewaterreporting.com/