In their search for a B2B extranet solution, DAMS International found mrc (creator of the m-Power Development Platform) and challenged them to build a solution. In response to DAMS' needs, one developer from mrc created a custom, secure b2b extranet site that ties into their ERP system in just seven days.

m-Power has answered all our concerns. It is the glue between so many sources of information and solves so many different issues.

Who is DAMS International?

DAMS International Ltd opened in 1967 and has since grown into one of the largest and most progressive office furniture manufacturers in the UK, with nearly 600 employees. Their list of customers is equally impressive, ranging from small furniture dealers to larger household names, such as Asda (a large UK supermarket chain, part of the Wal-Mart group), Staples, Costco, and Homebase (the second largest DIY retailer in the UK).

DAMS has a discontinued stock warehouse containing roughly 28,000 items and 1,000 different product lines. However, their customers could not access or purchase any of these items directly. In order to sell discontinued stock, DAMS had to send out emails, faxes, and phone offers to their customers advertising the special deals in the warehouse. If a customer was interested, they would have to order using the same outdated and inefficient methods...email, fax, or phone.

An offline website was developed to manage the warehouse, but as it could not communicate with the ERP, stock levels and available products were impossible to keep up to date. When a product was purchased from this system, the order had to be entered manually and stock levels on the website changed.

To top it all off, their current ERP system had very poor reporting capabilities. If a customer wanted to see a report, DAMS would have to download the data from the ERP, manipulate it in MS Access, put it in a spreadsheet, and email it to the customer. This was time consuming and didn't offer customers real-time data.

"It was all a very slow and manual process", said John Smith, DAMS IT Manager "A lot of wasted time, really." But even worse than the wasted time, was the lost revenue resulting from the problems with their discontinued stock warehouse.

Besides these problems, DAMS faced one more dilemma, one that almost every company is facing these days: The economy. While not hit as hard as others have been, they were still feeling the effects of a declining economy. However, DAMS realized that they could better insulate themselves from the bad economy by fixing the current problems with their discontinued stock warehouse.

"It was amazing how fast it was created. That would have taken many months with our current ERP provider."

DAMS set about finding a solution that would answer their problems. They tested many different software solutions from various vendors, all of which lacked the functionality they required. They wanted a product that delivered quality information, presented it professionally, offered speedy development, and could be used by both IT staff and non-IT staff alike. As they were quickly learning, finding a product like that is no easy task.

Finally, DAMS found mrc, creator of the web application development platform m-Power, and challenged them to build a solution. In response to DAMS' needs, Adam Flynn of mrc (UK) ltd. created a fully-functional, secure b2b extranet site in just seven days. "It was amazing how fast it was created", said John Smith, "That would have taken many months with our current ERP provider."

Their customers are very pleased with the new system. According to Brian O'Connell, DAMS' Marketing Services Manager, when presented with the prototype b2b extranet site at a recent convention, many customers were delighted and told him, "This is great. It's just what we've been looking for!"

Most of all, John Smith is impressed with m-Power's speed, flexibility, and simplicity. "m-Power has answered all our concerns", "It is simple to use and delivers live, up-to-date data. It is the glue between so many sources of information and solves so many different issues."

In a time when many companies are reacting to the struggling economy with layoffs, DAMS International invested in new technology, and is already reaping the benefits. For example:

They opened up a new 24/7 sales channel

The b2b extranet gives customers direct access to DAMS' discontinued stock. They can browse and buy at any time of the day or night. DAMS went from a slow manual process only available during business hours, to a fast, automated process available 24/7. According to John Smith, the new revenue created with this b2b extranet will pay for the cost of m-Power all by itself. Anything else they do with m-Power is pure profit, and they have big plans.

Their customers can now check inventory, run reports, track orders, and make purchases online. Since everything is automated, DAMS' telesales team can focus on selling, and their staff no longer has to be involved in the order process. What used to be a very manual process, leading to much wasted time, is now as smooth as can be. 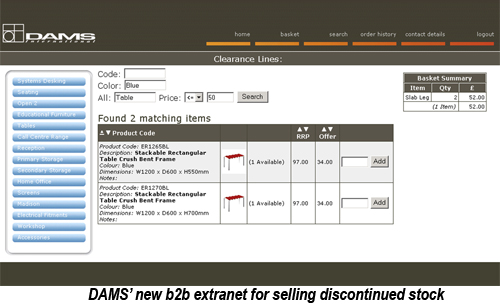 DAMS International is feeling pretty good about their new revenue stream and efficient processes in this economy. "We are in a great position now, with m-Power," said John Smith, "and when the economy recovers we are going to be in really great shape."

Even though m-Power will pay for itself after the first project, DAMS doesn't plan to stop there. In fact, DAMS has big, if not amazing plans for m-Power. Here are a few of the most immediate plans:

Everything they build with m-Power will tie back into their database and ERP. In fact, they plan to use m-Power to tie all of their existing systems together, to be the "glue" between everything they do. Most importantly, in a tough economy this is a great example of how one company is using technology to not only weather the storm, but to rise above it.

To learn more about DAMS, you can visit their Web site at: http://www.dams.com/