Happy New Year! Everyone here at mrc hopes that 2018 turns out to be your best year yet. As for our development efforts with the m-Power platform, we are wasting no time in our continual effort to make m-Power the best it can possibly be. In this newsletter, like ones in the past, will highlight the notable features that will be added to the next m-Power release candidate (February 2018) as well as highlight a recent m-Power feature you may have missed.

On February 1st, 2018, a webinar was conducted to cover the topics listed in this newsletter. If you’d like to see a replay of this webinar, please review the video below: 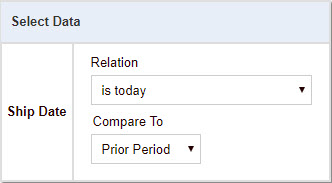 In the evolving world of business intelligence, we’ve noticed more and more of our customers and prospects asking for the ability to easily compare data from time frame X and compare it to time frame Y. With this in mind, our major reporting templates have been enhanced to allow end-users the ability to compare two different date ranges against each other. Comparison options include Prior Period, Prior Year, and Custom Range. So, if a user has selected data from Jan 1 2017 to Dec 31 2017, and chooses previous year, a second column will be displayed that shows all data from Jan 1 2016 to Dec 31 2016. End-users will love this feature as it allows them the ability to easily track trends and compare useful data in a very ad-hoc manner. Developers will love this too as this logic works by default without any additional programming!

Along with the idea of Period Analysis, we also wanted to improve end-user experience for users who work with dates a lot. It is often common for users to always want to see yesterday’s data, or the data for the current Quarter YTD. To do so, we updated our reporting templates to support many common date relationships. Notably, m-Power supports calendar year and fiscal year as well!

This logic has also been included into the Data Explorer, taking its adhoc reporting power to a whole new level!

For new Dictionaries, or for instances where customers choose to upgrade their existing dictionaries, they will experience an updated end-user menu that has been completely overhauled and chalked full of new features, including:

Developers can now add Auto Sequence logic directly from the Sequencing screen, rather than having to remember to add the code to the Field Settings screen. This should improve usability and make the process of adding auto sequence fields easier for developers. Along that same vein, developers will find a new options for adding auditing fields within the Field Settings screen. This logic will allow users to quickly add the ability to add audit data for Users, Date, and Time for when a record was Added, Updated, or Modified.

Great Feature You May Have Missed

Implemented in 2015, the Administrative Quick Nav option was added to the m-Power interface. It was added in as a way to allow developers the ability to very quickly jump to any specific Administrative function within m-Power. Seeing as how useful this feature was, we added a similar button next to it that allows developers to navigate to past applications with the click of a single button, as well as allow users to search for any application without having to backtrack to the main menu. Information about the Administrative Quick Link can be found here and the link regarding the Application Quick link can be found here.