Software vendor, FMS Solutions, needed to modernize the reporting tools that they distributed to clients. The challenge: Since most reporting solutions charge on a per-seat or per-user basis, even the most inexpensive option would get out of hand quickly due to the sheer quantity of clients who would be using it. Read this case study to learn how FMS avoided this problem (and modernized their reporting tools) with m-Power.

Both technical and non-technical staff can now create web reports

We were amazed that all of the FMS staff (non-technical and technical), were able to pick up on the reporting solution and push reports to clients within a matter of a few days after training.

FMS Solutions had a great problem--a problem that many companies would love to have: They were growing too fast. In fact, over the last three years, they nearly doubled in size.

FMS Solutions develops financial management technology solutions tailored specifically to the retail grocery and independent supermarket industry. They are considered to be the industry expert in benchmarking, best practices, and mission-critical support by the National Grocers Association. FMS currently services 1,800 retail grocery and independent supermarket locations throughout the United States.

Why is rapid growth a problem for a business? Well, the more FMS grew, the more difficult it was becoming to support new clients with their current reporting tools, which were starting to show their age.

The main problem was this: In order to run reports, their customers would have to log in through a Virtual Private Network (VPN) and generate character-based reports through a green screen interface. If an update was needed, FMS would have to mail update disks to their clients. It was an antiquated and unnecessarily long process for both FMS and their clients.

Both new and existing clients had started asking for the ability to run web-based reports. They wanted to access all their reports online, in one central location. They didn't want the inconvenience of logging in through a VPN connection and running character-based reports anymore.

Tim Laycock, FMS' Vice President of Information Technology, echoed the customer's sentiments, and also saw the big picture. "The bottom line", says Laycock, "is that the world is going to the web." He understood that if they wanted to provide the best service to their rapidly growing client base, they had to update their reporting capabilities, which meant a move to the web.

However, Tim knew it would be difficult to find an affordable option as FMS has hundreds of customers who would need to use the solution. Since most development platforms charge on a per-seat or per-user basis, even the most inexpensive option would get out of hand quickly due to the sheer quantity of clients who would be using it. Regardless of the obstacles, Tim knew that moving to the web was a must, and set out to find a way.

FMS immediately began their search for a better solution. Over the course of 2 months, they looked at 9 different reporting and dashboard development platforms.

After evaluating all 9 products in great detail, they decided on m-Power, a tool designed to automate application development and quickly bring enterprise applications to the web. Not only did m-Power meet all of their requirements, but also provided many options that they wanted, but didn't think would be possible to find in one product.

Moreover, m-Power's pricing wasn't based on the typical per-seat or per-license structure. Rather, it allowed FMS to have unlimited users with just one database license. "We found the cost of ownership to be superb based on our ASP business model," says Tim. With m-Power, FMS could have as many users as they needed without having to worry about extra costs.

Additionally, FMS' choice of m-Power also protected them from future costs down the road. Because m-Power works on any database or operating system, they won't need to purchase another solution should they decide to ever switch to a different database."

Right off the bat, FMS used m-Power to tackle the reporting problem. They wrote about 70 "canned" reports for their customers and pushed the new solution out to their client base in just three months from the time of purchase. 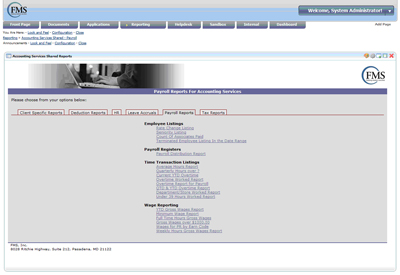 Ease of use and cost savings are great, but are not the means by which FMS measures success. They base the success of a project on their customer's feedback, which to FMS' delight, has been extremely positive so far. "We have already had several clients comment on the quality of the output that we can produce using m-Power," says Tim. "Additionally, feedback has been very positive regarding the intuitiveness of the interface, and the ease of creating even complex reports. Our clients like the output format as it's easy to customize the output to their needs."

The reporting process has improved dramatically: Customers can now log in through a SSL connection and run secure web-based reports quickly. With all the different output options, users have many different ways to view their data. FMS even has the ability to push data into Excel straight out of m-Power, which is very important for their customer's accountants. If a more complicated report is needed, FMS can create and email the report right from m-Power.

Besides generating reports almost instantaneously, the ease of use that m-Power provided really impressed Tim. "We were amazed that all of the FMS staff (non-technical and technical), were able to pick up on the reporting solution and push reports to clients within a matter of a few days after training."

So far, FMS has just focused on reporting - using m-Power to deliver "canned" reports (through m-Power menus), allowing users the ad-hoc ability when needed, and limiting them to only their data through m-Power's security features. But, Tim has plans that extend well beyond reporting. Most notably, future projects will include building an executive dashboard and a financial reporting suite with m-Power.

The future looks bright for both FMS and their clients. "Time savings for both us and our clients in creating, running and distributing reports will be huge," says Tim, "Development time for other applications will save resources and allow us to continue to move forward rapidly." But most importantly, they have a solution in place that their customers are happy with, and at least for FMS, that is the true test of success.

To learn more about FMS, you can visit their Web site at: http://www.fmssolutions.com/