If you’re looking for an intuitive way to develop enterprise web applications (without programming), here’s some news you’ll love: We just released a brand new m-Power user interface, and it’s the most intuitive one yet! You can find more information about it below, or–if you just want to try it for yourself–feel free to sign up for a free Trial. 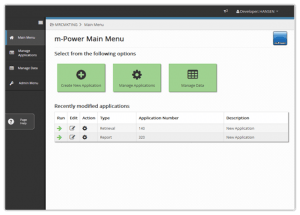 
With that in mind, we rebuilt m-Power’s interface with an emphasis on two critical areas:

If you’d like to try the new m-Power interface for yourself, check out the free m-Power Trial. It will guide you through the creation of a web application (all without programming), and the whole process should only take a few minutes.