This newsletter is a very special one for us at mrc, as it formally announces our redesigned m-Power interface. This project, which has been about 2 years in the making, was brought about to improve the user experience for m-Power developers. In creating the new interface, we talked with many customers to get a flavor for what people liked about the m-Power development interface and what could be improved.

The overwhelming feedback we got from our user-base was that the existing interface involved too much navigation, which led to scenarios of developers getting lost in the software. We received other feedback about increasing system speed and adding common m-Painter functionality directly into the interface.

Overall, there were countless changes to the interface. Rather than listing out each and every change, I’ve outlined the significant changes you’ll notice with the next release candidate. Also, reviewed all of these enhancements in a recent webinar. You can watch the webinar replay below:

New Look, Easier to Navigate, Faster
The redesigned interface was built in such a way that existing m-Power developers will be able to pick up right where they left off with the older interface. All existing applications will be available to edit, run, or customize without needing any kind of conversion process. As you’ll see from the screenshot below, we redesigned the interface with a more modern look. To top that off, it operates much faster than previous iterations of the m-Power interface. As a developer, this means that screens load in a fraction of the time they used to, giving you more time to perfect your applications.

Application Specs Panel
When editing an application, you will notice a new navigation panel available on the left side of the screen. This panel displays a variety of information about your application at-a-glance. This information is interactive, so you can actually modify any of the specs just by clicking on one. For instance, instead of having to navigate to a Field settings screen, you can simply click on the “Edit” icon next to any of your fields in the navigator area and update your field information immediately. 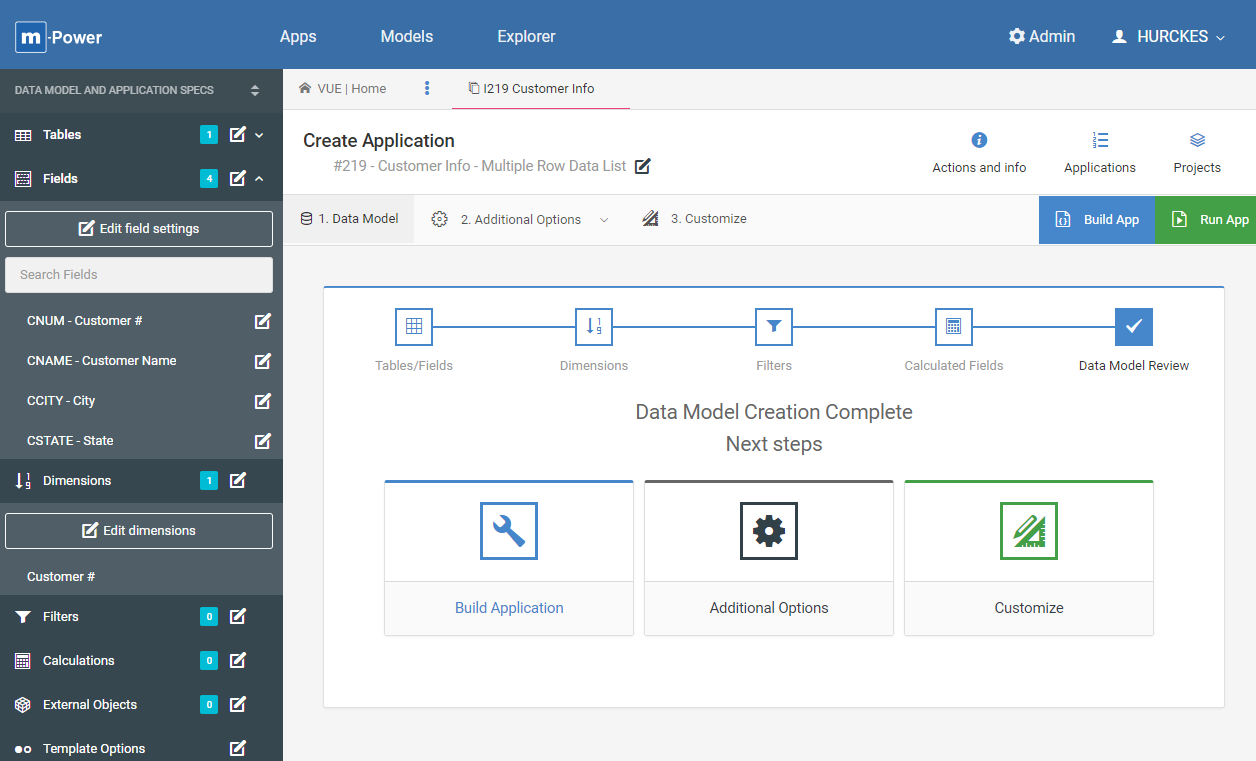 Data Explorer
Data Explorer was a large focus in this interface as well. Numerous customers have licensed Data Explorer and report back significant successes with it. To encourage other customers to try this great feature, we have expanded Data Explorer to be accessed by m-Power developers without the need for additional licensing. m-Power’s Data Explorer redesign utilizes many of the same look/feel approaches used by m-Power as well: improved look, left-side navigation panel, quick, and easy to use. Whether used by developer or end-user, Data Explorer allows for quick ad-hoc searches of data that can ultimately be exported to Excel, saved for future use, implemented as a graph, and/or added to a dashboard. Customers who want to give end-users access to Data Explorer are able to try Data Explorer via a trial key. 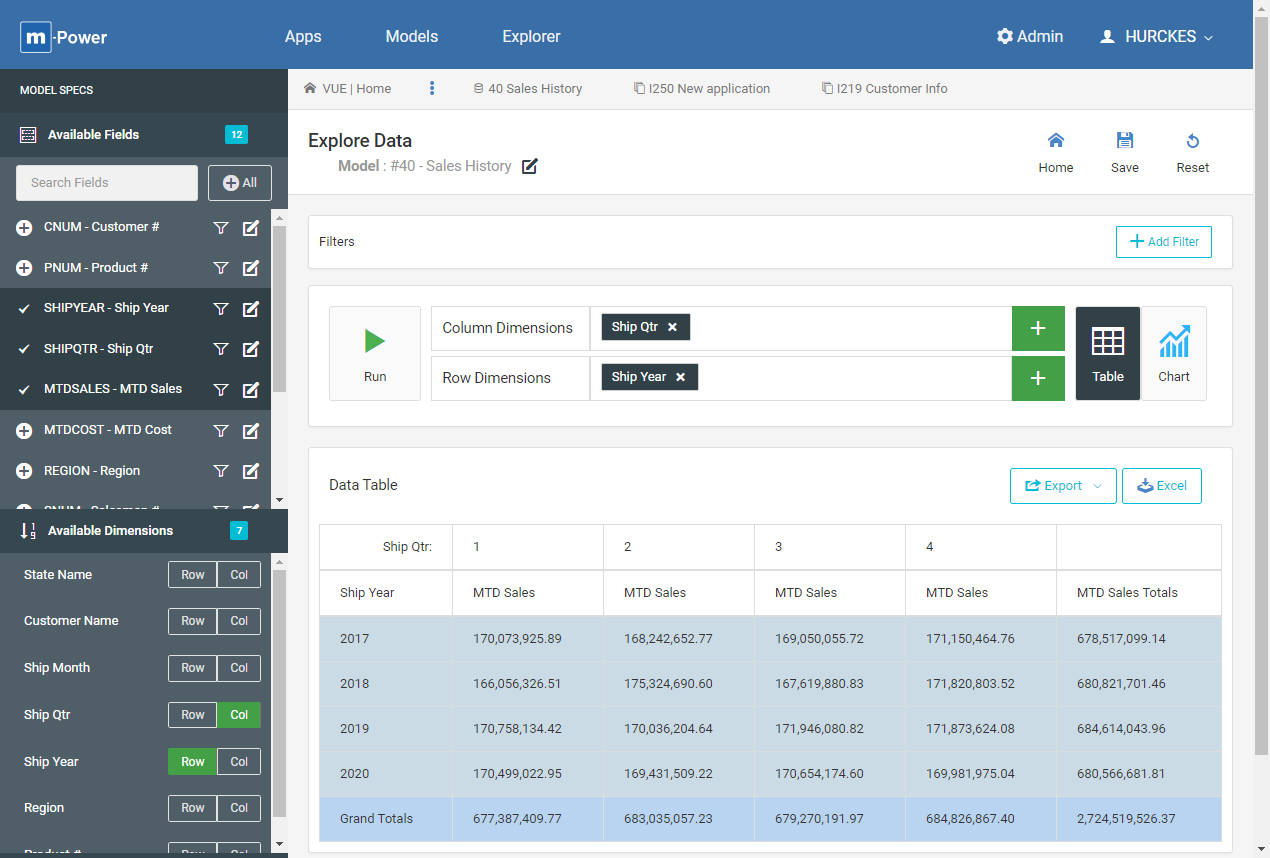 Data Models
Whether you use Data Explorer or not, one new feature you almost certainly will use are Data Models. Think of a data model as the specs of a common query you can use over and over again. Imagine, you have a query that joins out to 3 tables, has 4 dimensions, a filter, and a couple of calculations. Having to remake this across several applications could grow tiresome. With the advent of Data Models, you can create that query once. Then when you create a new application, you can use the existing data model instead of building the query from scratch. If you do, all of the specs you had loaded in the data model will be copied into your application and you can dive in. Of course, the other useful piece of the Data Model is that it is the bedrock for Data Explorer objects as well.

Application History Bar
Another area we focused much of our attention on was the Application History bar. In the old interface, you could navigate back to the previous app, but customers wanted to be able to go back to other recently modified applications in a single click. The navigation bar, below, shows this. 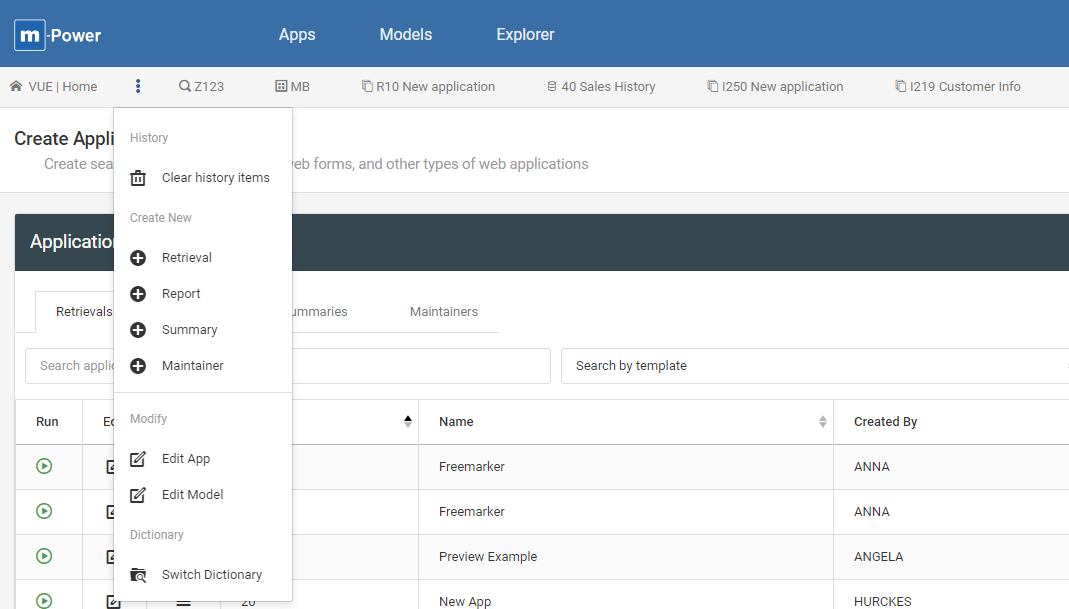 Notice that in the screenshot above, I have clicked the vertical ellipsis and I am brought to numerous options that address frequent m-Power actions, such as creating a new app or switching dictionaries

Customize outside of m-Painter
As mentioned above, one of the pieces of feedback we received was developers would like common m-Painter features made available in m-Power. The rationale for this, of course, is that in the event you have to recreate your HTML, you don’t want to have to recreate your HTML customizations. I recognize that it would be impossible for us to program every m-Painter scenario, but we identified two common practices: The inclusion of dropdown lists and modifying aggregate functionality for reports (sometimes known as the last row of detail substitution). Both of these scenarios can now be handled directly within Field Settings where you can set the aggregate option as well as specify an option list. Configuring these settings in m-Power means that in the event of an HTML overwrite, or an application copy, these customizations will not be lost.

Administration Navigation
There are so many great features of this interface, the last one I want to highlight here is how easy it is to navigate the Admin functionality. One key piece of feedback we received about changes to the interface was improving the navigation of the Admin area. Customers noted that if they were in the middle of an application build and had to, for instance, set the format of a date field at the dictionary level, they’d have to get out of the application, make their change, then find the app and where they last left off. With the newest interface, developers can open whatever functionality they need without navigating away from their current screen. 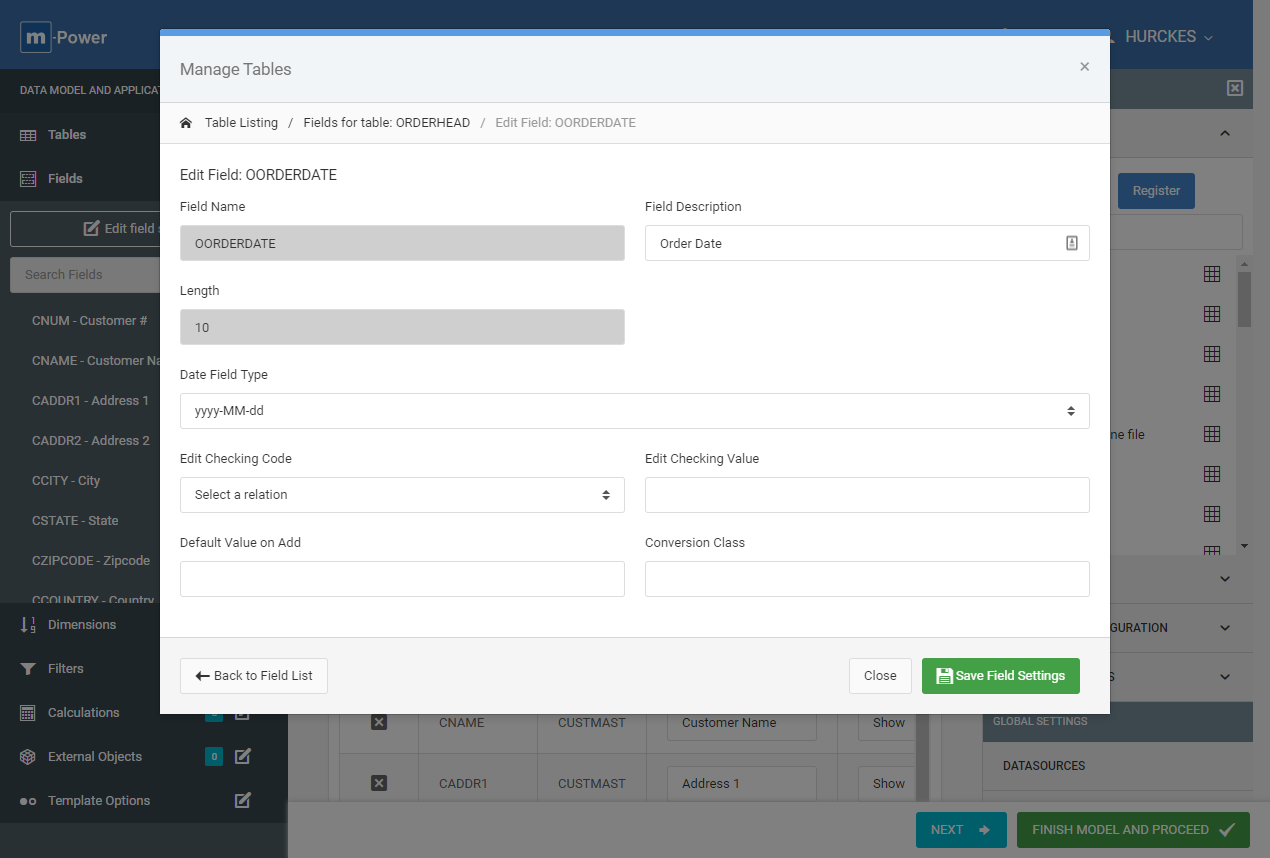 Notice in the screen shot above, I am editing a field at the Data Dictionary level. Instead of navigating away from my application, a modal window appears for me to make my change. That way when I am done, I can simply save and be right back to where I started.

End-User Experience
Finally, I wanted to address the issue of end-user experience as I understand that for some customers, it is difficult to introduce new changes for users who may be resistant to change. All the changes I have addressed so far involve no noticeable difference for end-users. Simply put, end-users would be unaware of this interface redesign as the generated applications would be identical to those made previously.

However, there is some functionality, such as Dashboards that were significantly improved. New dashboards include: …Parameter Helper, can include DX or App, Global Filter, etc..…. Because of all of these new improvements, we made the deliberate decision to not convert old dashboard applications. That means that existing Dashboard applications will continue to look and work just as they do today for your end-users. Should you decide you want to create new dashboards – you can do that too as the systems run independently of each other. In a similar fashion, existing Data Explorer modals will continue to run in the same UI as they always have as to not disrupt end-users.